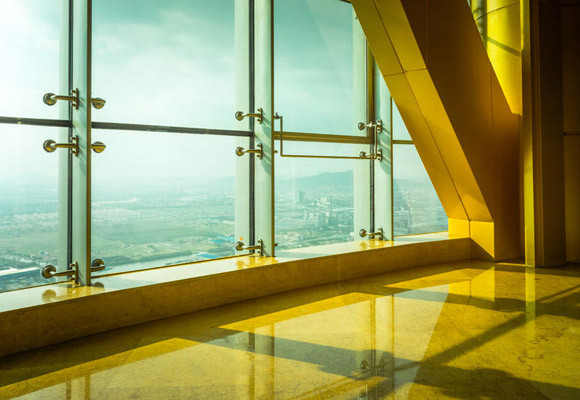 Window wall is a structure built from reinforced concrete and after the main structure is finished a skin of glass is attached to the side of the building. A curtain wall can be as small as a common storefront or many floors such as a skyscraper. In earlier 1900’s the curtain wall frames were made of steel and then the glass was located and fitted into the frame. The size of the curtain walls was only a few stories because of the weight of the steel. In the curtain wall techniques of today aluminum is used and the curtain wall is much lighter. Aluminum can be used in many different shapes to give you some very unique designs for architecture. Custom shapes can be designed with aluminum. Gaskets and other glazing compounds have been developed to help attach the glass to the aluminum frames with a very airtight seal that protects from moisture and air intrusion. There are several different curtain wall systems that are utilized when a curtain wall is constructed.

Most of curtain wall systems that are constructed today as well as in the past are installed long pieces known as sticks between floors vertically and between vertical members horizontally. Most of the framing members can be constructed ahead of time in another location. These pieces will then be installed on the structure and the glazing will be installed after the curtain wall frame is installed. This will protect the glazing from being torn or ripped during transportation and installation.

A unitized curtain wall system is constructed in a unit. Each unit is complete in itself. The glazing is installed into the unit before it is transported and installed onto the structure. This type of curtain wall system will cut down construction time allowing for a quicker completion. In some cases the unit will also include the window already installed in the unit. The unit will be constructed in another location and then transported to the structure location for installation.

Written by Sky Windows and Doors

We were directed to Skyline Windows and Doors when we were searching for a nice selection of contemporary shower doors. They had exactly what we were looking for at a god price. We are very happy with the entire process and they even handled the installation. Great job!

When you need a custom design set of glass shelves I highly recommend the crew here at Sky Window and Doors. I was completely taken back with how appealing they looked and the prices were hard to beat!

The window installation services of Skyline Windows and Doors were top notch. Removed the old wooden window, installed energy efficient aluminum windows, completed the job in two days and left the place cleaner than when they arrived. Thank you.